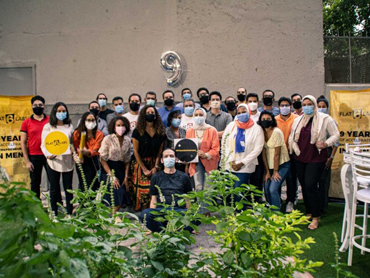 Over the past 9 years, Flat6Labs has enabled the transformation of the startup ecosystem through the 290+ pioneering startups it has invested in, the 660+ founders it trained and mentored, and the 38 Demo Days that exposed the startups to investors, corporates and the media. Flat6Labs has also achieved its first exit in less than 18 months from date of investment; and it’s currently managing AUM of $45mn. Flat6Labs’ portfolio of companies have collectively raised almost twice their invested capital.

Currently, Flat6Labs stands as one of the most active early stage investors in the MENA region, and this wouldn’t have been possible without the team, the support of our partners and mentors, and the belief that the ecosystem has in Flat6Labs.

“Flat6Labs’ 9-year journey has been one that captured the very essence of our belief in the talents, skills, and passions of MENA’s aspiring entrepreneurs. The continuous support Flat6Labs has been capable of giving to its 290+ startups and the successes during the past nine years, wouldn’t have been possible without the amazing team of 50+ colleagues across six countries, 30+ LP investors in our funds and to the thousands of individuals who have believed in us, and in our mission to transform the region through innovation and entrepreneurship.” — Ramez El Serafy, CEO of Flat6Labs.

In hindsight, many of our startups enabled this success by showing great promise, and they have thus become renowned in their respective fields.Nine of these startups are Instabug, Simplex, Sawerly, Clearmove, Moneyfellows, Hawaya, Mint Basil Market, SINC, and GoMyCode.

Since Flat6Labs Cairo invested in Instabug in 2012, the bug-reporting platform has grown tremendously to provide its solutions to 25,000 companies across the globe and to have its solutions implemented in countless apps across 400,000,000 devices. Their one line of code has attracted tech giants like OnePlus, Ebay, Lyft, EA Sports, Philips, Soundcloud, and more.

Most recently, Instabug has received a Series A funding worth $5M from Accel ,an American VC firm, and other renowned angel investors. In an interview with Waya Media, Omar Gabr, Instabug’s Co-founder said, “We grew 120% in revenues in the last 12 months, adding dozens of Enterprise customers. We’ve always been running a disciplined business, we’re almost profitable for some time now. This is what made our fundraising fast in the middle of all the current events.”

In the upcoming few months, Instabug is aiming to release a number of new services into the ecosystem, as well as expand their operations and their team.

Simplex has been one of the first businesses in Egypt to create locally manufactured and assembled CNC machines. Being the pioneer it is at that, the likes of the Egyptian Ministry of Transportation and Schneider Electric have relied on their solutions, instead of depending on importing plasma machines and milling machines.

“We have exported a range of our machines to 12 countries so far, and we’ve opened a 5000m2 new factory in 10th of Ramadan, Egypt. Flat6Labs’ seed investment, connections, and continuous support have been paramount to our current success and future growth.” — Ahmed Shaaban, Simplex Co-founder

Sawerly is a Saudi-based online marketplace that connects photographers with potential clients. The startup’s growth over the past years has seen various photographers using their platform as a main source of stable income.

Clearmove (previously known as Sakkini) is a mobility platform that helps employers track, deploy, and manage their employees. Their solution has so far been adopted by 500+ entities, and they operate in 144+ countries. The startup has also spent around 150K hours into R&D and has hired over 70+ talents internationally. In 2016, the startup has raised $4m to expand its operations globally, to do more R&D, and develop more alliances internationally.

The money circles app, MoneyFellows, has taken the liking of many in Egypt since it has transformed the time and effort consuming money-saving circles, into a technologically-enabled service. In 2020, the company raised $4m in a Series A investment from Venture Capital firms, Partech, and Sawari Ventures.

“We’re currently seeking to expand our efforts locally to other governorates in Egypt, and we also have plans to expand regionally by June 2021. You can also expect a line of new services to be launched by next year.” — Ahmed Wadi, Moneyfellows Co-founder

After Hawaya (Harmonica) joined Flat6Labs Cairo in 2017, they have quickly garnered the attention of individuals who are seeking serious relationships in Egypt. The match-making app has since gone to raise funding from both Flat6Labs and 500 Startups in March 2018 worth $150K to double-down on their algorithms and expand the reach of their mobile application.

In August 2019, the startup received an acquisition deal by the Internet Giant, Match Group, which gave Flat6Labs the opportunity to make its first major exit at a 16x return on investment in just over one year. The application later changed its name to Hawaya. Currently, they are expanding into different countries where match-making for serious relationships is desired.

Hawaya now has grown into 13 different markets and has helped over 3 million single Muslims begin their love journeys!

“We’re thrilled to announce that we were invited to ring the opening bell at the Nasdaq stock exchange, celebrating five years of Match Group as a publicly traded company on the US Stock Market and commemorating our success in fostering meaningful connections around the world!” — Hawaya Team

Mint Basil Market, The online marketplace for all-natural diet, beauty and household products has been making valiant efforts to impact the Lebanese community after its graduation from Flat6Labs Beirut. Currently, they have been hammering down on their new line of immunity products as COVID-19 sweeps the world. However, after Lebanon was struck with the explosion that took the lives of many and destroyed much of the city of Beirut, the startup took it as a mission to help the Lebanese people through sponsored donation packages to be sent to Arcenciel (a Lebanese based non-profit organization) and has shared a list of psychologists and organizations offering free psychological support. Currently, the startup has its sights set on UAE as a plan of expansion, and they will be joining Womena’s upcoming cycle.

“Flat6Labs has opened a lot of doors for us and we’ll always be grateful for how the team gave up parts of their office space so we could have a warehouse that wasn’t my bedroom in the early days of launching. They’ve also introduced us to one of our angel investors, and were a great support system during some of our most challenging moments. We’re really grateful.” — Vanessa Zuabi, Mint Basil Market’s CEO & Co-founder.

In 2019, the company raised $250K in pre-funding. Now, the startup helps 4,000+ businesses manage and track their employees through their platforms in the UK, USA, as well as other countries. The startup has received seed funding from Flat6Labs Bahrain in Spring 2018.

“Flat6Labs were the first people outside of the founders to believe in SINC’s vision. Their early support enabled us to hire our first employees and go on to raise multiple rounds of funding. The connections we’ve made through Demo Day ended up leading to funding and are still influential advisors in our company today.” — Samuel Dolbel, SINC’s Co-founder.

GoMyCode was first funded by Flat6Labs Tunis in December 2019. Since they were funded they have gone to reach more of Tunisia’s coding society to help develop the capabilities of both youngsters and professionals. Their vision is to help create a high-end computer science education for everyone to fulfill their potential and realize their passion for building and shipping real products.

“We’re planning on launching 4 new Hacker Spaces, in Algeria, in Station F in France, Egypt, and Morocco. We’re also currently working on developing a new website and rebranding as well as working on launching a new tech channel: www.gomytech.co. Most recently, we’ve raised $450K to further our growth and help with our expansion plans in the MENA region.” — Yahya Bouhlel, GoMyCode founder.

While innovation is at the core of Flat6Labs and its startups, it takes more than just innovation to success. Our startups across MENA have been resilient, passionate, and hardworking through many challenges, the latest of which is the pandemic. It is not just about innovation, it is also about execution and the continuous drive to bring something new to the table and to impact the community.